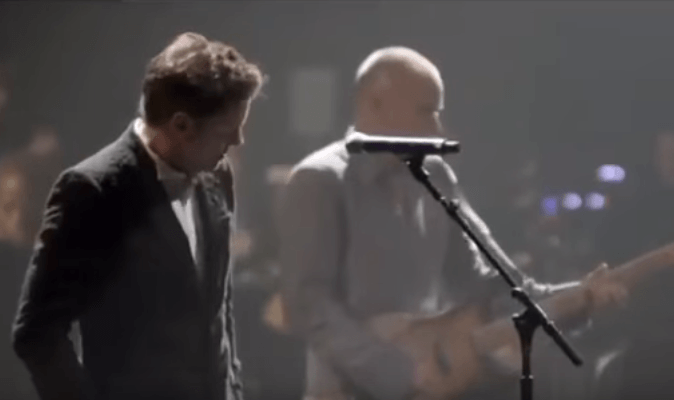 Did you know that Robert Downey Jr can sing better than most modern pop stars? We sure didn’t, until we saw this amazing video of him performing on stage with Sting!

That’s right, not only did he perform with the legendary artist, he certainly held his own when it came to the vocals. Watch as Downey Jr and Sting perform Driven to Tears.

If you’re like most people, you probably didn’t expect the Iron Man actor to have such beautiful vocal skills, but after watching the performance, it’s easy to see why Robert Downey Jr. stole the show. The video was filmed in 2011, when Sting was celebrating his sixtieth birthday with family, friends, and of course fans.

There were many other stars in attendance that night, such as Lady Gaga, Billy Joel, and Bruce Springsteen, but you can probably guess who our favorite performer is now!

This wasn’t the actor’s only foray into the music world. As Wikipedia explains:

He’s sung on several soundtracks in his films such as Chaplin, Too Much Sun, Two Girls and a Guy, Friends and Lovers, The Singing Detective and Kiss Kiss Bang Bang. He released a CD in 2004 called The Futurist, and while promoting his film Tropic Thunder, he and his co-stars Ben Stiller and Jack Black were back-up singers “The Pips” to Gladys Knight singing “Midnight Train to Georgia“.

Downey’s most commercially successful recording venture to date (combining sales and radio airplay) has been his remake of the 1973 Joni Mitchell Christmas song “River”, which was included on the Ally McBealtie-in album Ally McBeal: A Very Ally Christmas, released in 2000; Downey’s character Larry Paul performs the song in the Ally McBeal episode “Tis the Season”.

MariannaOnline.com uses cookies to ensure that we give you the best experience on our website. If you continue to use this site we will assume that you are happy with it.Ok